On day 8 we continued breezing along the Oregon coast. We woke up from our rest in the parking lot of a casino in Florence and headed for breakfast. It was a local place called Fresh Harvest Cafe, and we had some mouth-watering homemade biscuits & gravy, and a delicious oatmeal skillet.

From there we hit the Sea Lion Caves just north of Florence, where Tara and I paid to take an elevator down to the largest sea cave in North America. Most of the seals were out on the rocks but I bit the bullet and spend $14 for a ticket down. Fortunately we did see 2 of them lounging in the cave. I guess the male was down from Alaska, so all the sea lions were out of the caves for pupping season. This was going on when we visited Pebble Beach as well, as they had big fences up blocking the view so tourists wouldnt stop and disturb the sea lions during pupping. The walkway along the coast to the cave and viewpoint provided some spectacular scenery, and a great view of the famously photographed Heceta Head lighthouse. 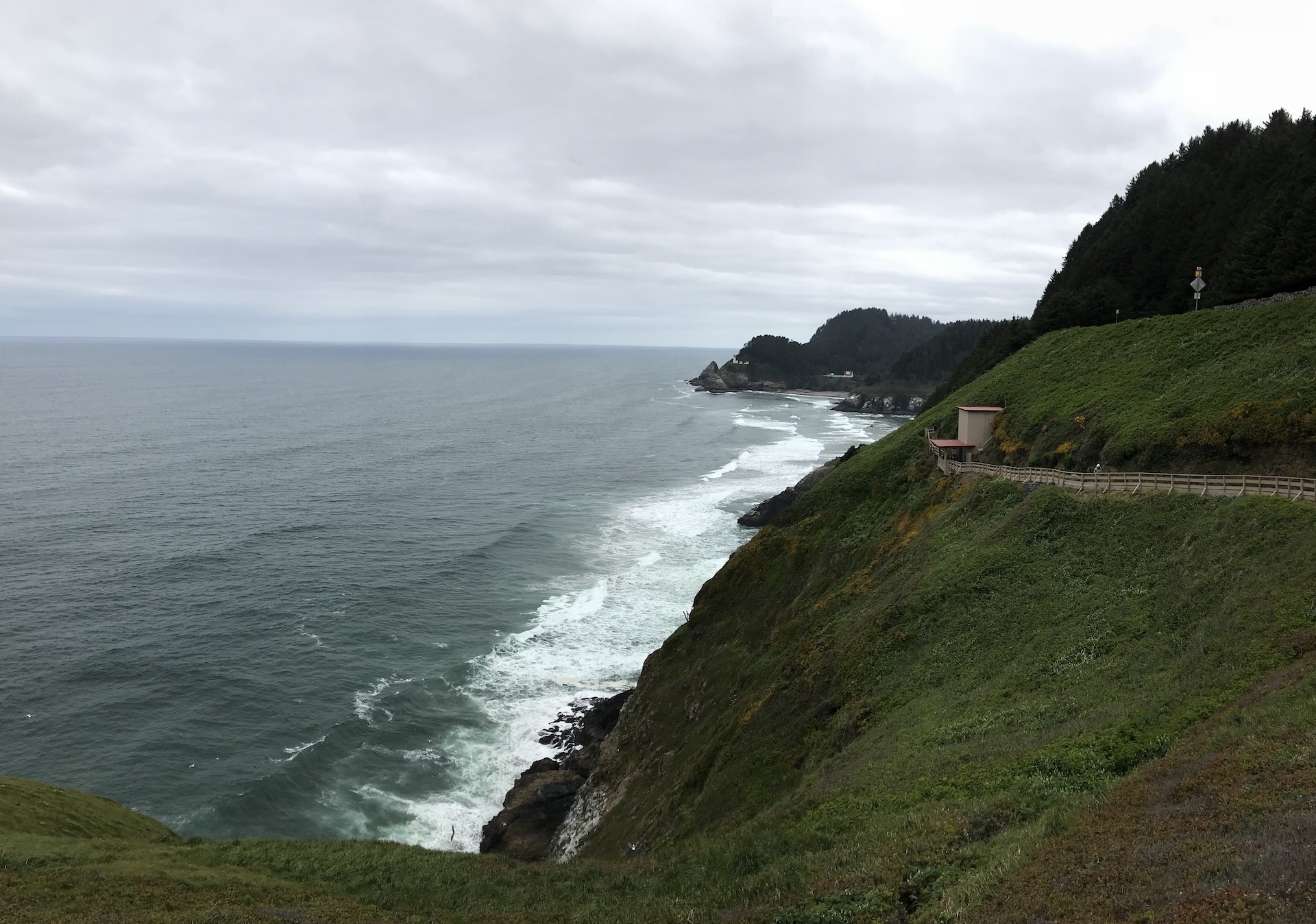 Heceta Head is the tiny white building on the far point of land. The building in the foreground is the elevator to the sea lion caves.

Driving past Heceta Head, we continued along the 101 to Newport where we got out and explored Yaquina Head lighthouse, another famous one. It is the tallest and second longest operating lighthouse in Oregon. You can get in with a national parks pass as it is BLM managed. I believe the lighthouse operations are managed now by the Coast Guard, and lighthouse keepers no longer exist as the lighthouses are now automated. 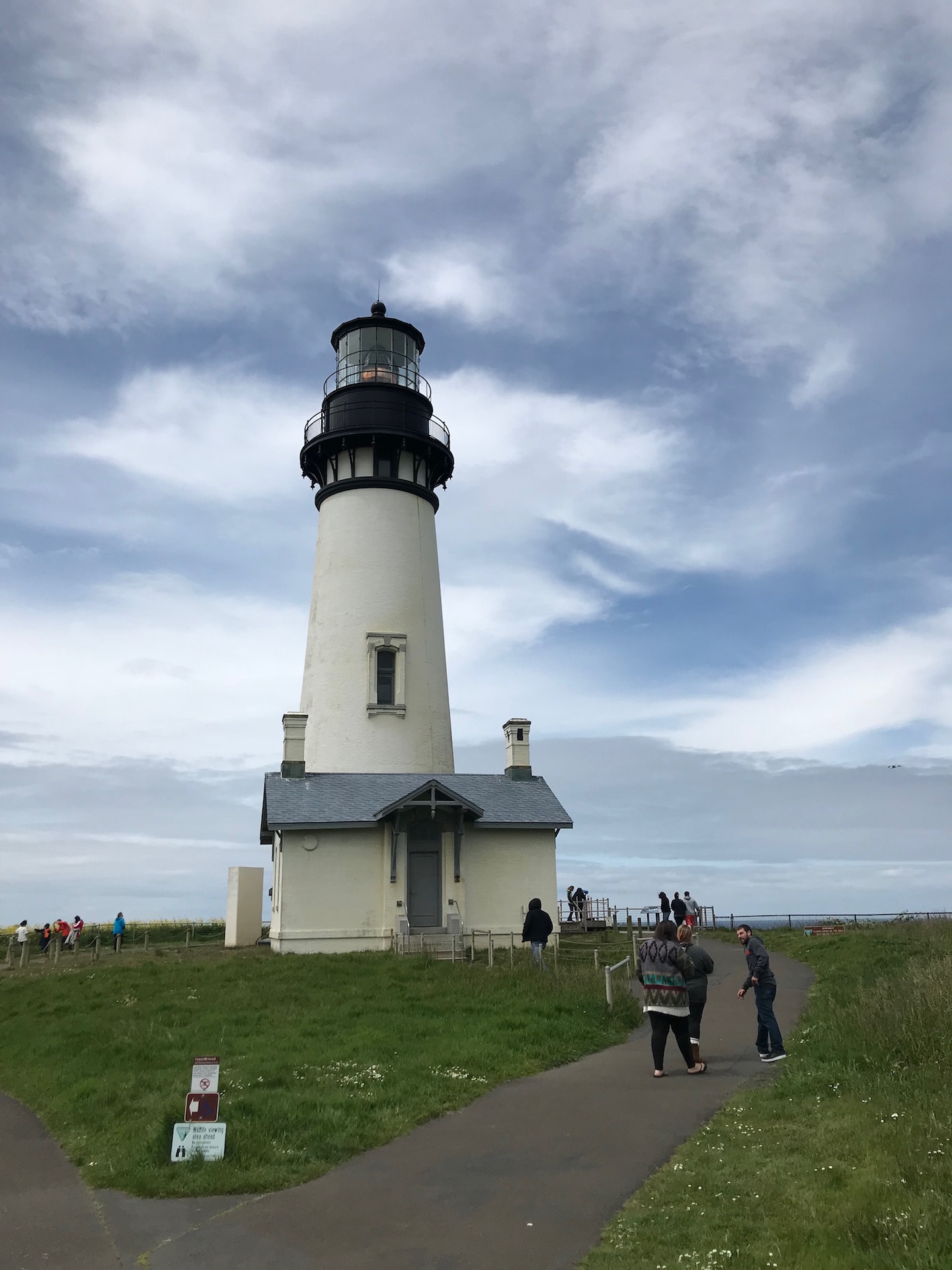 Yaquina Head lighthouse, now preserved by the BLM and US Coast Guard

On the way along the highway after this, I saw a bunch of vehicles out speeding along the beach. I’d never driven on a beach so had to hone in on the little side road that gave you access, and spend a few minutes (much to Taylor’s chagrin) peeling around in the beach sand. 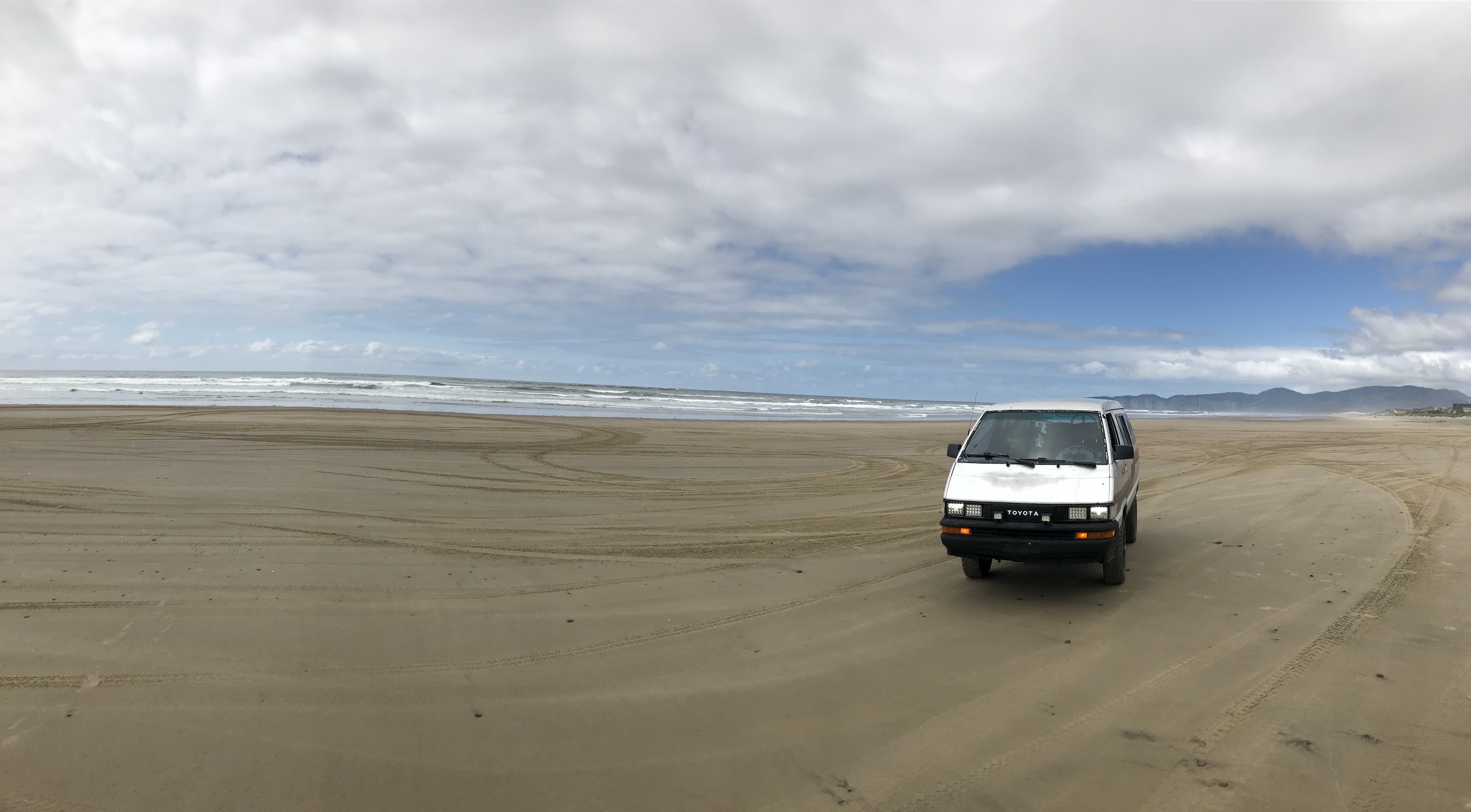 Driving on the beach is really fun, and makes me want to live in Oregon

Next, we headed northward and took a scenic detour through Pacific City and Tierra Del Mar, then turned off at Netarts toward Tillamook. Of course, we had to stop at the Tillamook factory and sample some cheese, see the visitors center, and enjoy the hell out of some ice cream. We each had a tantalizing waffle cone with two giant scoops of the freshest and most delicious ice cream. It’s probably a total placebo effect but I swear the Tillamook Mudslide at the factory tasted even better than the containers from the store. 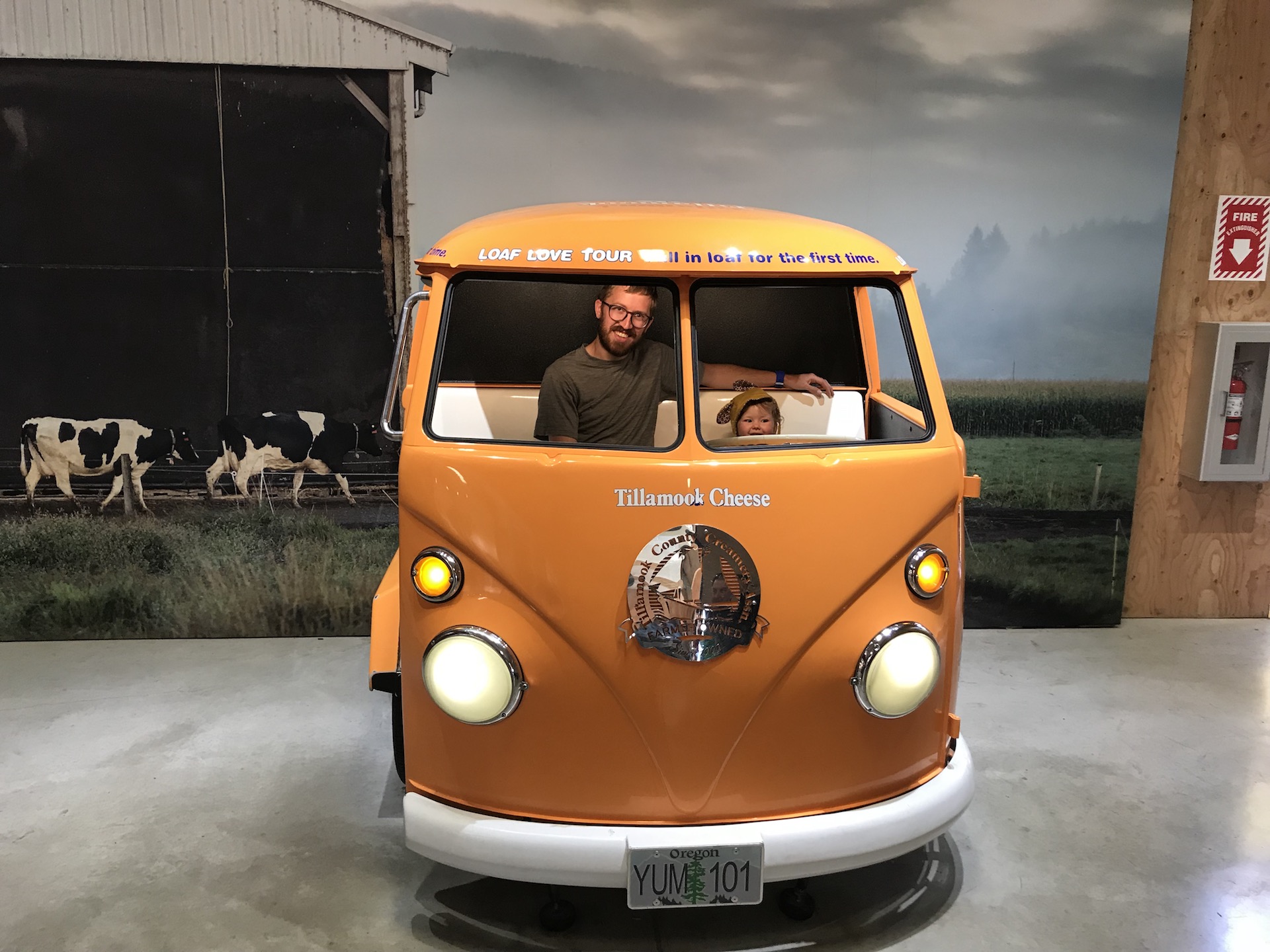 “Say cheese!” was the running joke amongst the throng of visitors

Feeling fat and happy, we plugged northward past Cannon Beach and stopped at Sunset Beach, another one you can drive on, where we met our Van Alert hosts for a beach picnic. They grilled up some impressive platters of meat, fresh fruit, sticky rice, and more. It was really great that they shared dinner with us and treated us like we were long time friends, even though we had just met. They also had some friends there with them who had 2 little girls, one of which was Tara’s age, so they all had a blast digging and playing in the sand together. 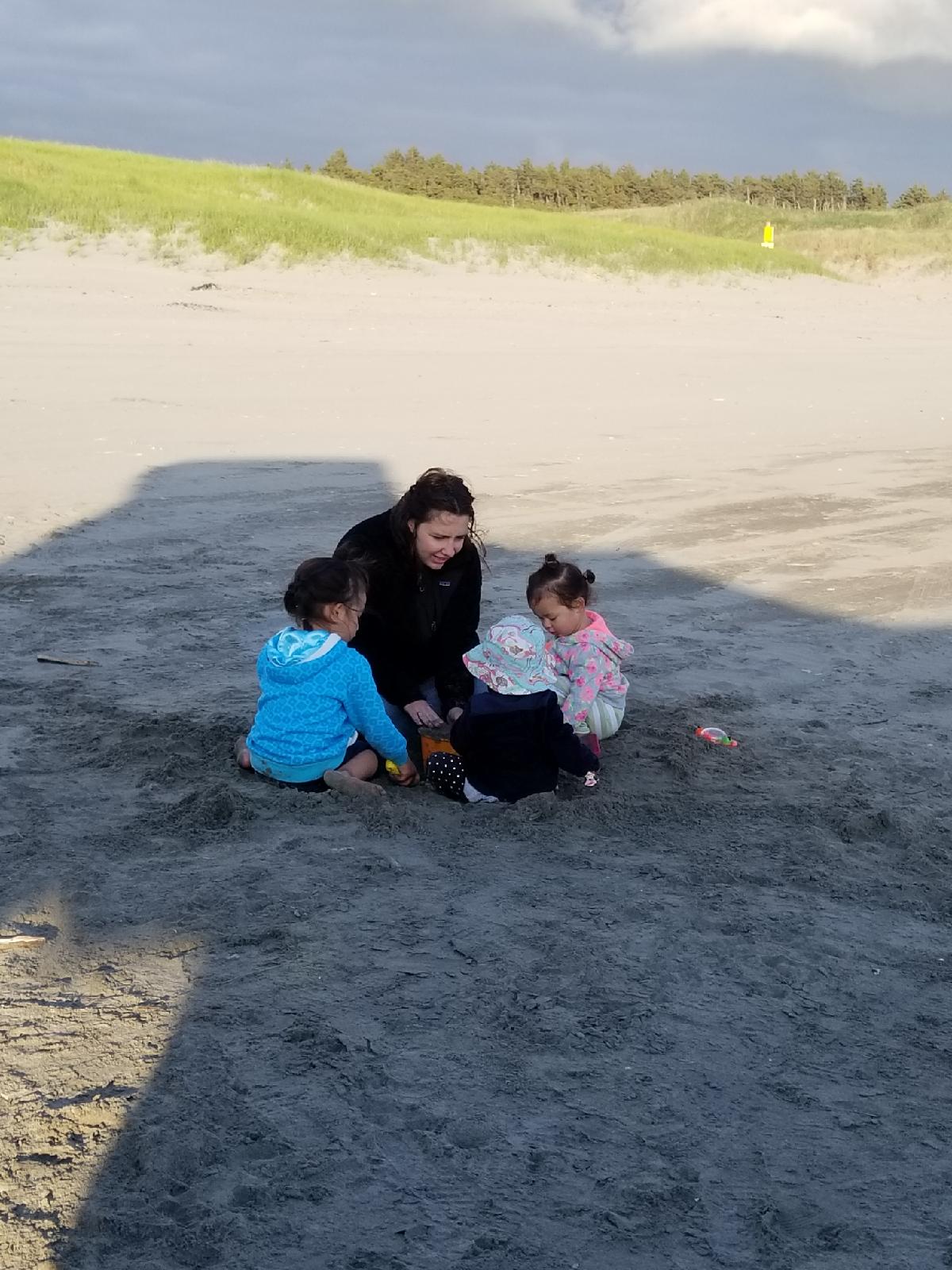 Staci had an impressively awesome Westfalia (which I totall regret not photographing) and Joe was a upbeat and positive VW fan himself, arriving in a Golf right after us. We stayed the night in their driveway, a quaint country home in Warrenton. After chatting it up about vanlife and good karma, Staci lent us her state parks pass so we could go check out some local sightseeing spots in the morning. We’ve been really appreciative of the good people we’ve met this trip on Van Alert and how willing they’ve been to meet/host us (entirely for free.) Faith in humanity restored!