Day 5 was highlighted by our visit to the Monterey Bay Aquarium. We started for Starbucks in Monterey first thing in the morning for some of that sweet, sweet WiFi (and their amazing chorizo and egg sandwich.) I also brought my laptop in to charge it up and catch up on my writing for the blog, but oddly all of their outlets had been covered up. That was pretty weird (and annoying) so we did all we could on our phones.

I’ve been to a number of aquariums and Monterey Bay’s was probably the most impressive. There were a lot of really neat exhibits and everything seemed to be done in a harmonious and sustainable way. For example, they had what I believe was the only successful giant kelp. Apparently this is impossible to grow outside of the wild because the conditions are so hard to replicate, but they have tanks and pumps that constantly cycle sea water directly from the bay at the rate of tens of thousands of gallons a day. The tank was breathtakingly large at 2 stories high. They had a feeding session where a diver jumped into the tank, and had some back and forth with the session host and audience. It was an awesome show for every one of all ages to enjoy. 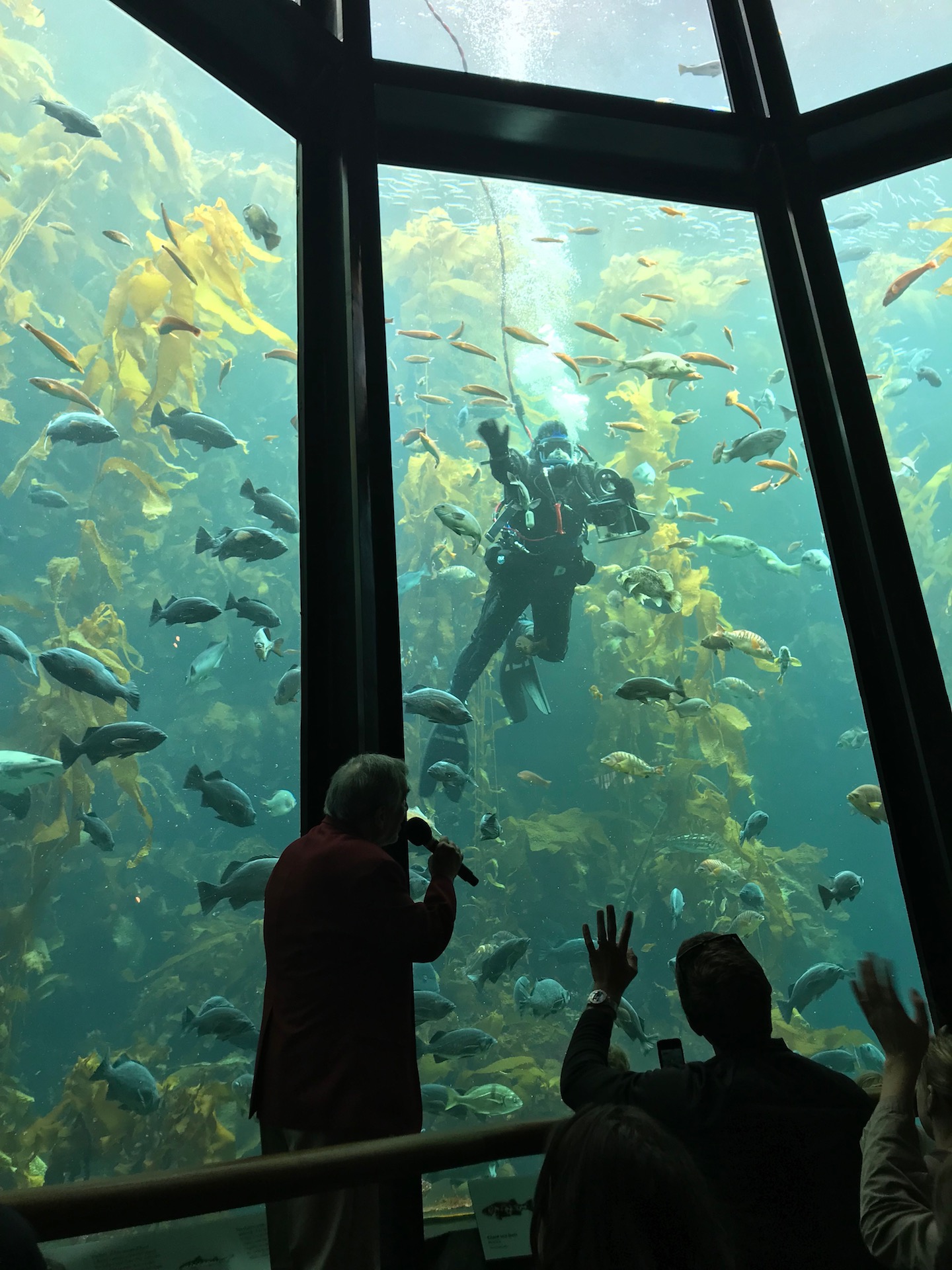 The giant kelp and feeding session

We also tried to see the sea otter feeding, and the penguin feeding, but those were a little frustrating as the windows to the tank were quite small, so it made it impossible to see anything that was going on unless you were one of the people pressed up against the glass. My favorite part was the “Open Ocean Exhibit” which had the craziest displays of jellyfish I’ve ever seen. Their jelly selection was truly awe-inspiring. They also keep the area dark and have some ambient music playing as you walk into this room with a wall-to-wall wide tank that immediately left me stunned and captivated. 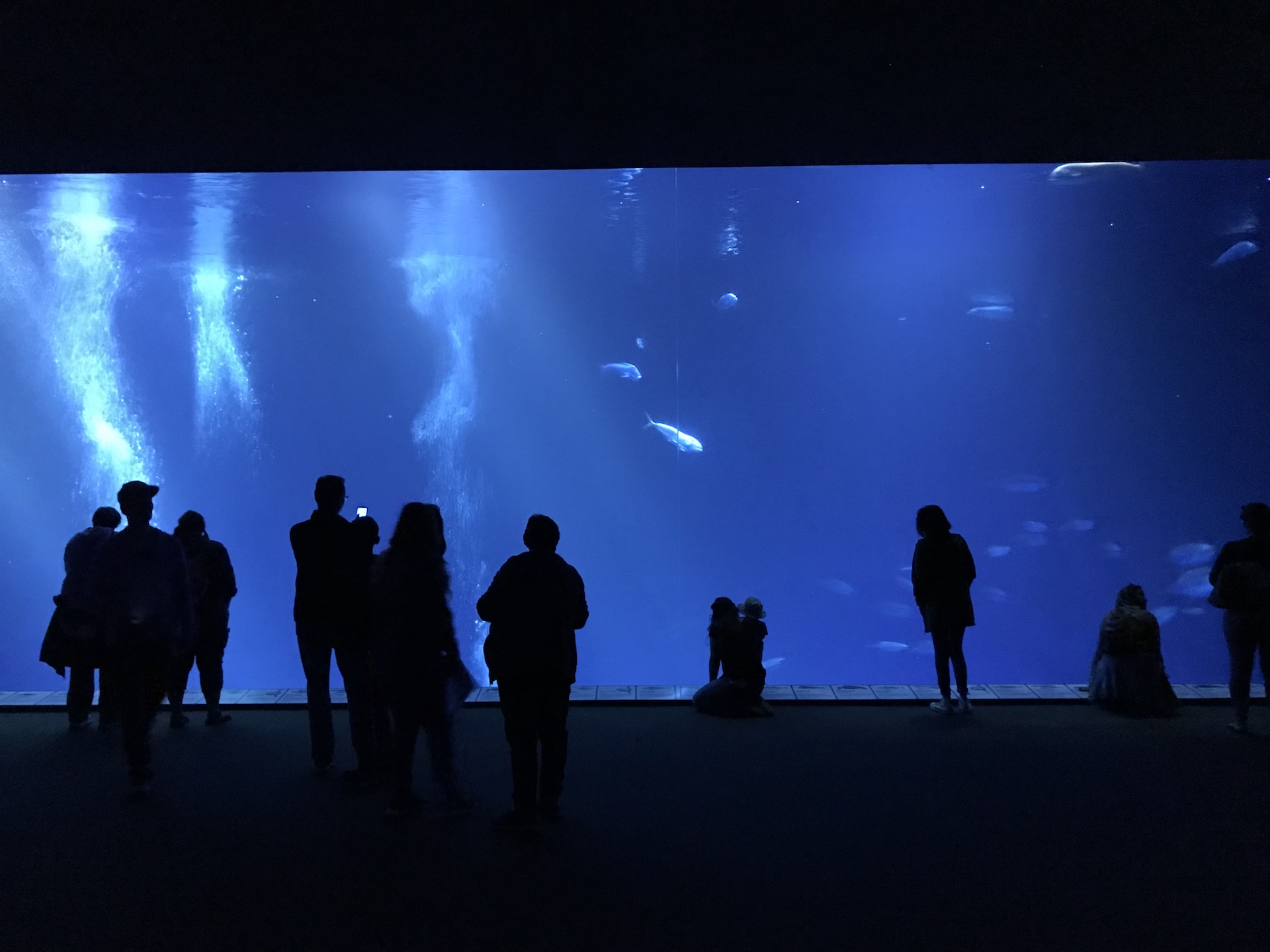 The aquarium was an inspiring visit, and provided a great experience and areas for adults and kids of all ages. The deal was made even sweeter by the passes we received from our Airbnb host. The passes even let us skip the substantial ticket line that had formed before we got there 15 mins early. I despise waiting in line (who doesn’t) so it was worth that alone.

We continued northward after our aquarium visit, a windy drive up highway 1 toward San Francisco. We stopped at Swanton Berry Farm along the way, a small farm store north of Santa Cruz, and had some mouth-watering strawberry shortcake. It was so good we decided to pick up 3 small cartons of freshly picked strawberries as well. Tara is a huge fan of strawberries and watching her enjoy those over the next day or two was adorable (and peeved Taylor because everything Tara owned was getting stained with strawberry juice!)

Once we arrived in San Francisco, we stopped briefly at Sutro Baths, ruins of an old bath house on the bay. We then stopped for a crappy photo at a parking lot near the Golden Gate Bridge. We had both been to San Fran, and Tara had just fallen asleep, so we didn’t care to experience the buttcheek clenching frustration of driving through rush hour traffic while also having really crappy data and no idea of how to navigate the area. We continued across the bridge and took the 101 north for a bit, then cut over towards Bodega Bay. 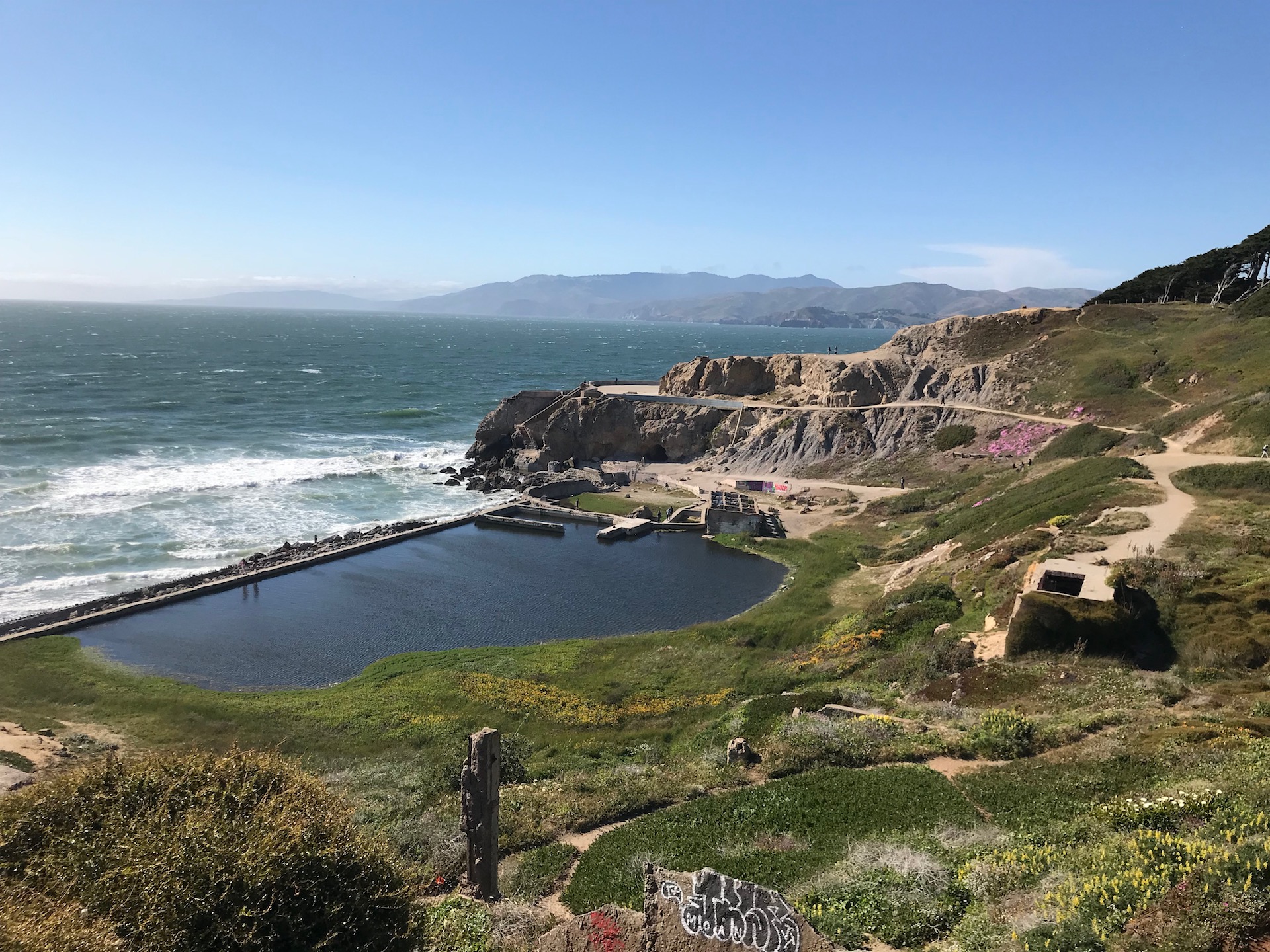 Sutro baths in San Francisco, an interesting site with a bit of a bizarre back story

Bodega Bay was an interesting, cute little seaside town where we shared a plate of crab enchiladas at a mexican restaurant and then decided to find a spot to stay the night. I drove up and down the highway for a few miles looking for a spot but saw no camping signs at every pull out. I did see one beach parking lot that didn’t have any signs forbidding overnight parking, so we tried our luck and set up for the night. After laying down at about 10pm, we received a violent knock on the glass and an announcement “POLICE!” It was a state park ranger, who aggressively questioned what I was doing and informed me I could not stay the night there. I didn’t feed her confrontational attitude at all, and she eventually chilled out and suggested we drive up to Jenner and there was “a pullout with a maroon van” along the road outside town that was not state park, but county owned, and that we might be able to camp there for the night as long as local law enforcement didn’t bother us. We groggily moved up the road about 8 miles and tried our luck, sleeping on the pullout with our unspoken maroon van buddies, and were lucky enough to get a full nights sleep.