Day 4 marks the day we finally touched down on the 1. After waking up in the most amazing place ever, and finding a swing with a photo-perfect setting, we reluctantly decided to come down off the mountain. 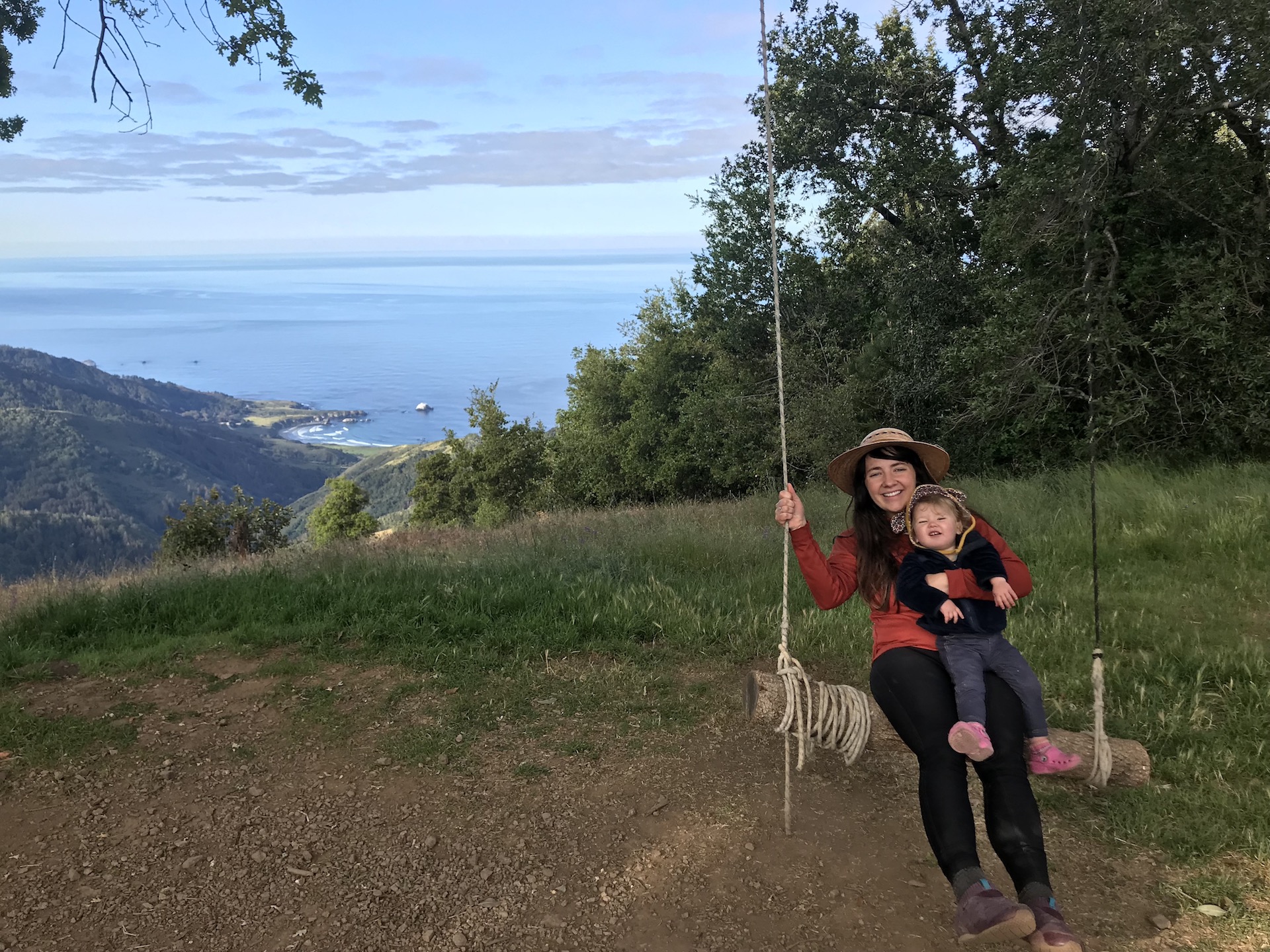 When we had the van all loaded up to go, I noticed while hopping up into my seat a faint “hisssssssss” from the front drivers side tire. Oh boy. Sure enough the tire was very low, but fortunately not flat. Tweaking the valve stem in either direction would either make the leak way worse, or disappear. I figured it must have happened on the way up, maybe the valve stem got caught on a rock and cracked it? Either way, we knew we had to pump up the tire and find a remedy. Taylor had a string bracelet on she had made, so we cut it off and tied it around the hole in the wheel. 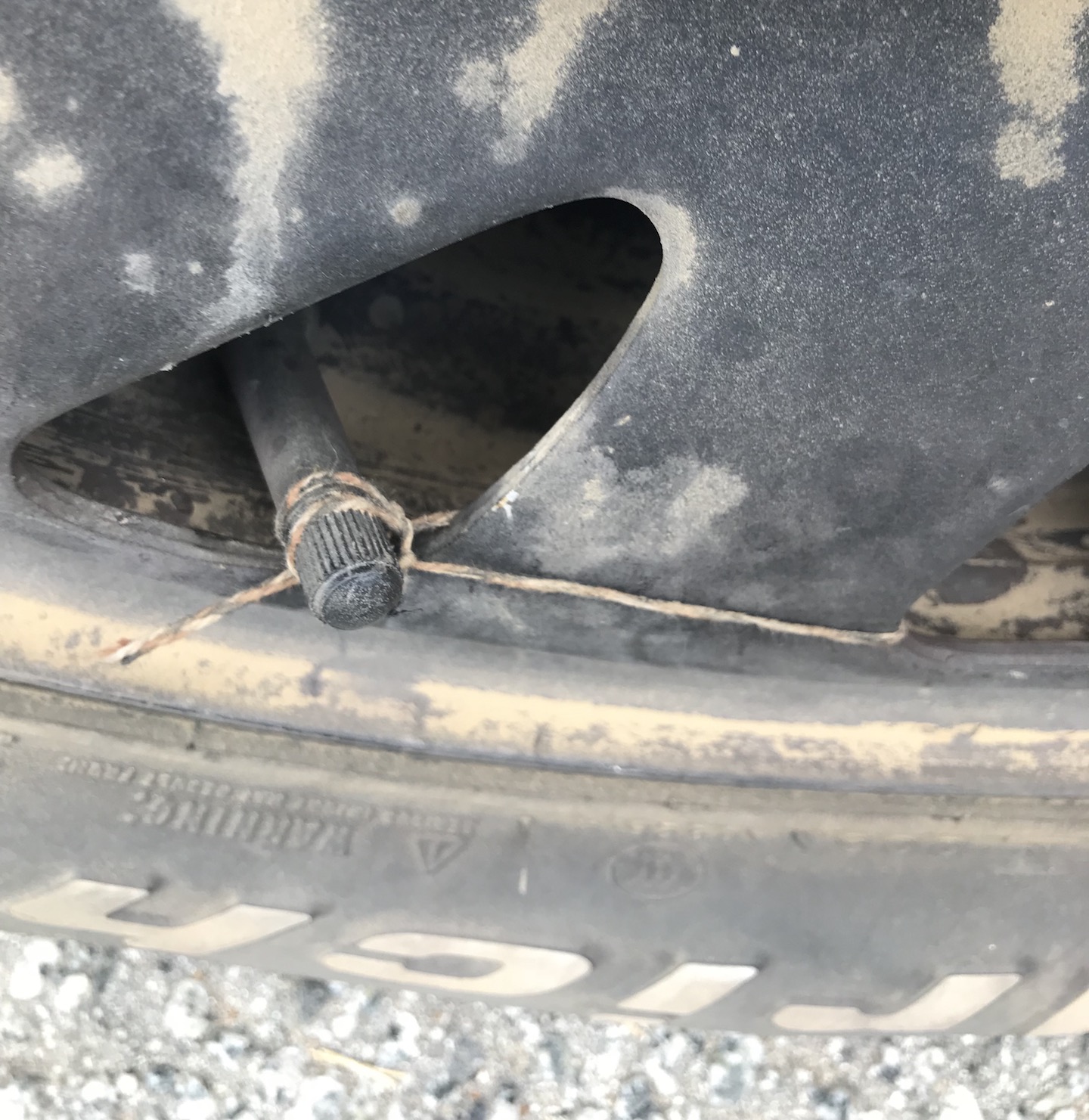 Our string fix, still holding strong after about 20 miles of driving

Once that was tied off and appearing to have stopped the leaking temporarily, I then tried to start the car and heard a click, then all the electronics shut off. The car was completely dead, and had no signs that it was getting any power at all. This is when I started to stress out a bit. Well, after stealing a wire from my horn to try and jump the starter (which was unsuccessful) I went to hook up my jump starter (even though I knew it wasn’t a battery issue because I had just used the battery to power the tire pump) and discovered that the nut on the negative battery cable post had wobbled loose. Immediately I knew that explained everything. A loose ground cable = bad electrical connection = no power throughout the whole vehicle. It must have rattled loose on that bumpy road up to camp. I hand tightened it down, checked the tire PSI, and it started right up. We were on our way to the coastal highway, in need of tire repair, gas, and a properly tightened ground cable. No big deal.

Amazingly, this stranded 2 lenghts of string and hand tightened battery terminal held the whole way along Big Sur and into Monterey, where we pulled into a Costco and had them repair it. I was amazed I didn’t once have to get out and fix anything, or refill the tire.

Along Big Sur we saw what you’d expect – some of the most breathtaking views of any place on earth. The sound and power of waves crashing against the jagged rock cliffs and the winding road with its bridges and lush greenery was incredible. Cruising this highway with the windows down, enjoying the refreshing air off the ocean and the crisp cool air was exactly how I imagined this trip and was a literal interpretation of my years of dreaming about what this “someday” road trip might be like. 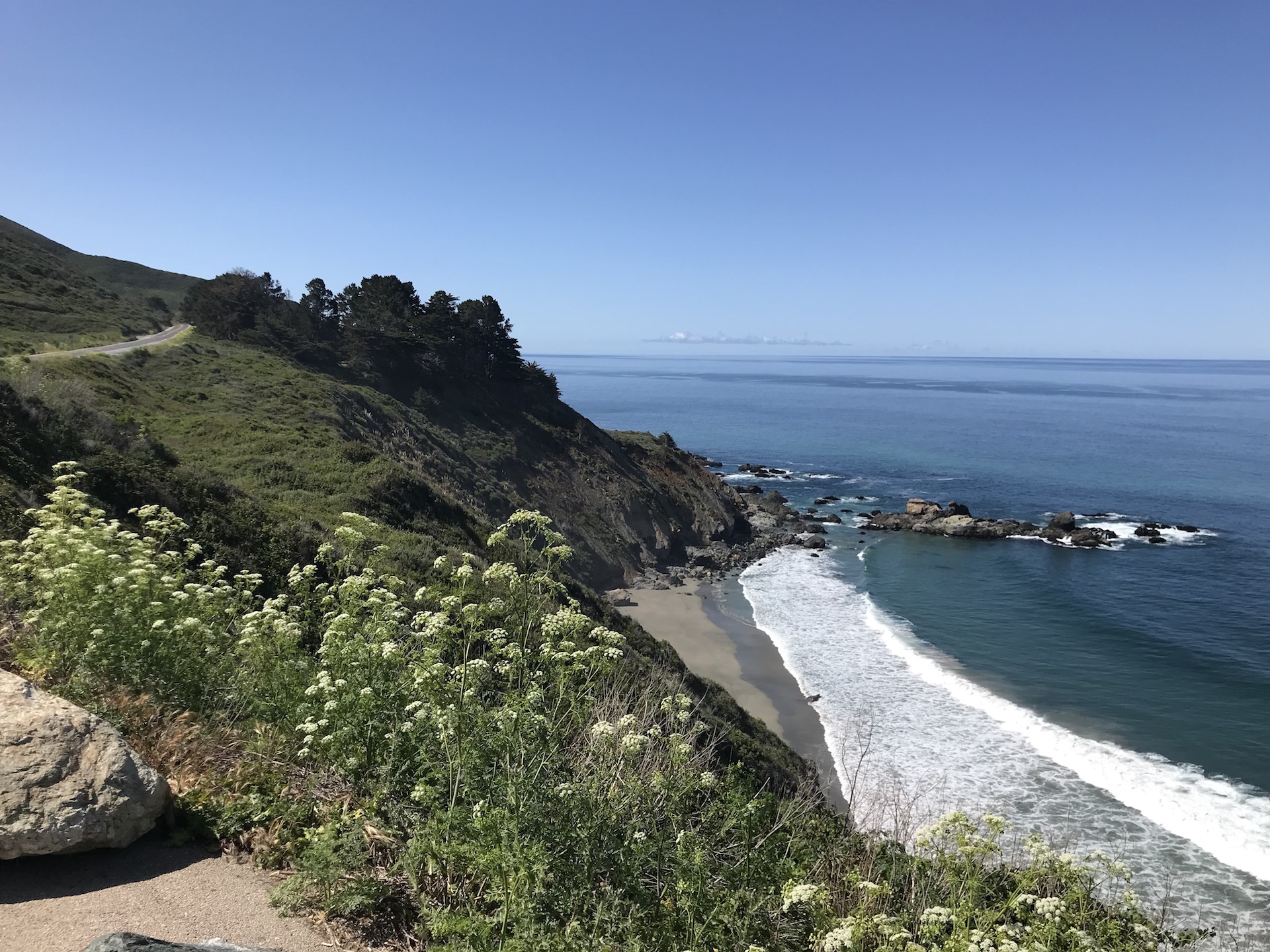 We stopped at a few spots along the route up to Monterey, including Pfeiffer beach, a hidden cove of a beach with prime photo ops. Tara jumped right down to the tide and began giggling with sheer delight as the ocean crashed in, then rushed back out underneath her feet. She could have stayed there all day and stood in the sand as the waves splashed underfoot. We wandered the shoreline as a family and laid basking in the sunlight until it was time to move on. 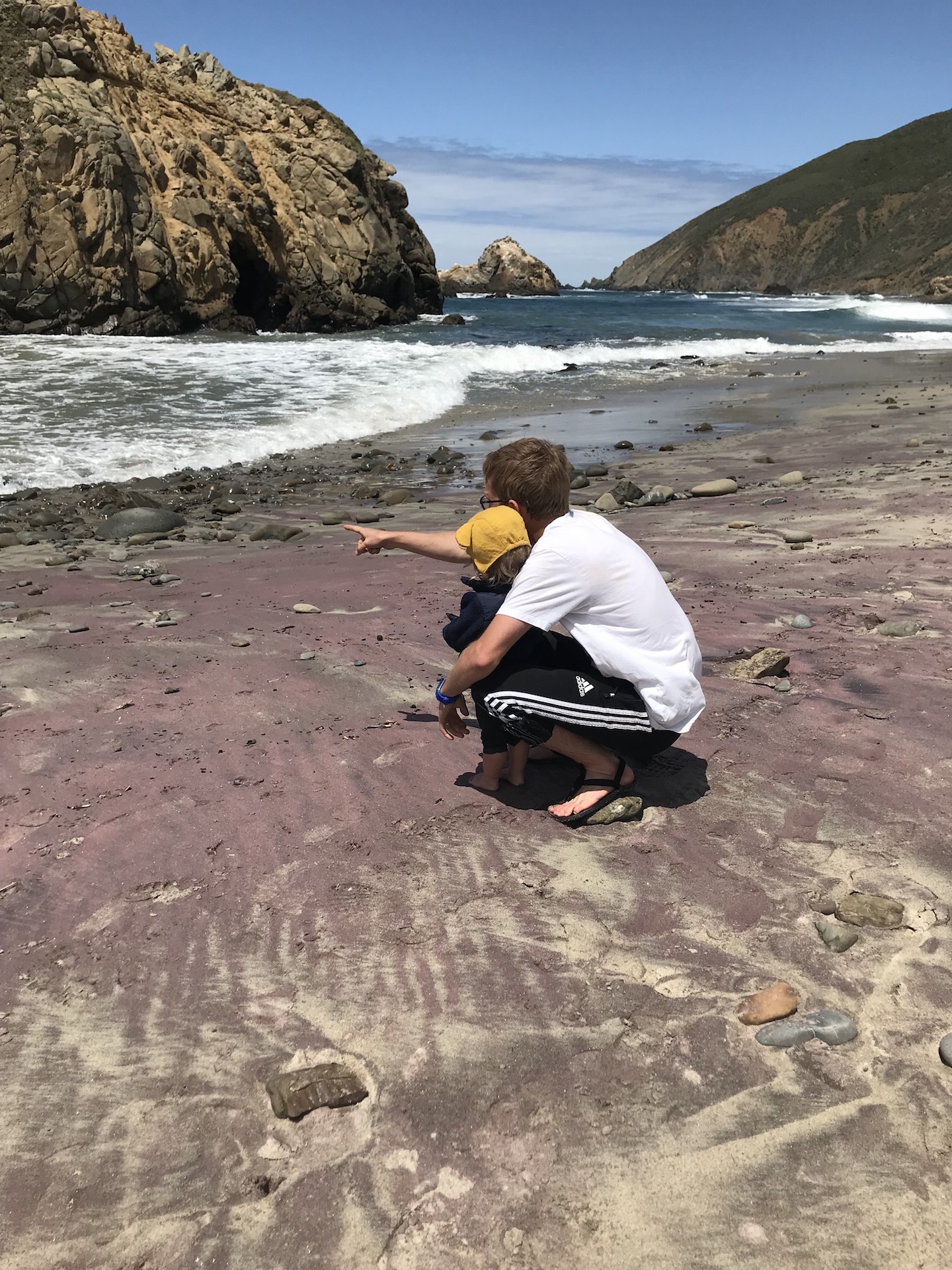 Dad, why are you pointing at the water and not putting me in the water?

Once we reached Monterey we took the 17-mile road tour, which loops around the peninsula and the famous Pebble Beach golf course. It was a spectacular drive itself, with ample opportunities for seeing wildlife. We saw and heard the seals barking, the clamor of tourists feeding squirrels and ravens, the sea bird covered rocks in the distance, and wandered the cypress forests. It was totally worth $10, but $10.25 – ehhh – that’s pushing it (the entrance fee was oddly set at that – $10.25 even. I had to break a 20 to cover the quarter extra. What?) 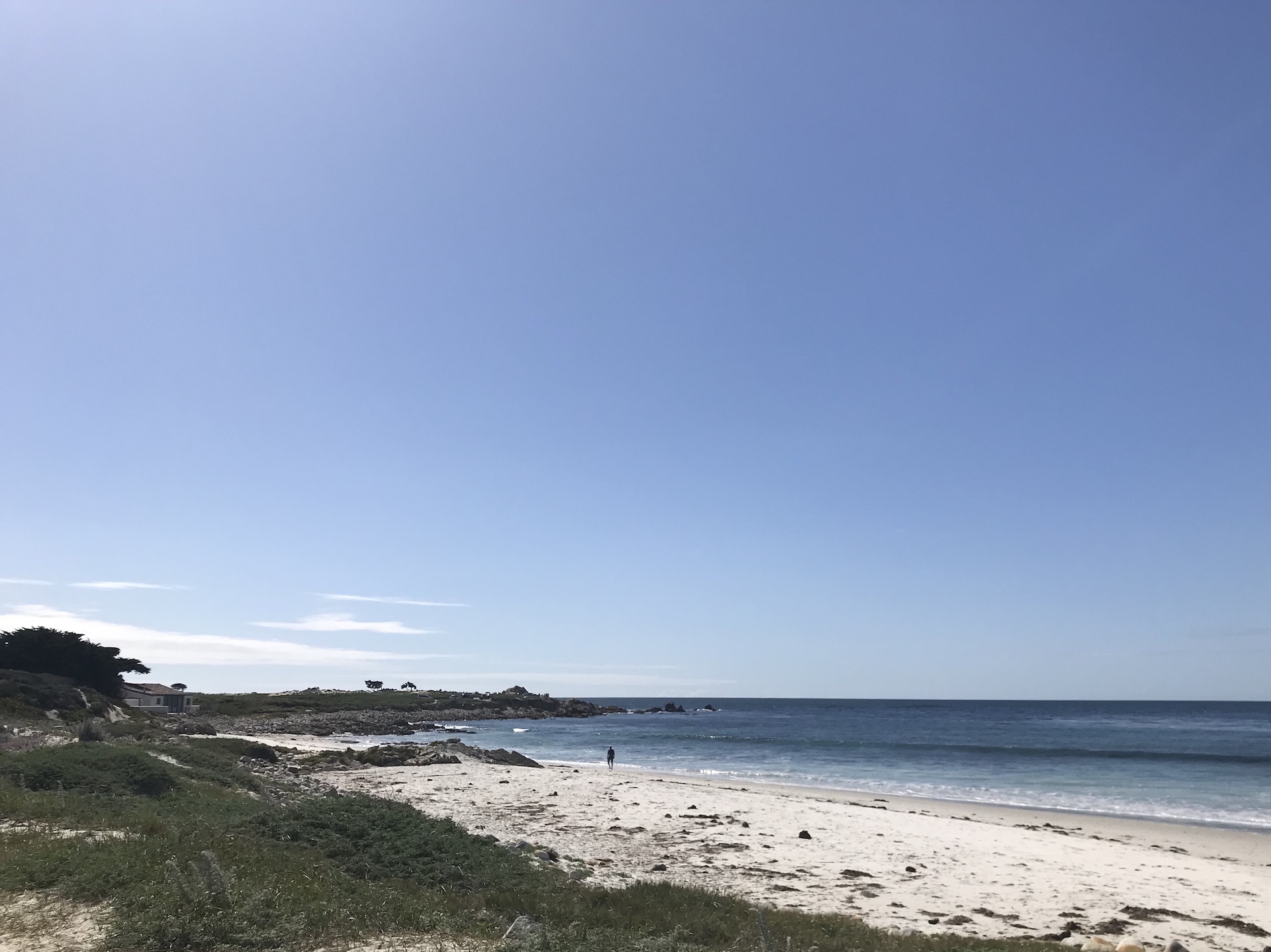 After having our tire fixed and getting dinner at Costco we decided to get an Airbnb rental for the night so we could clean up the van, shower, and use the wifi (our data cap on our family plan was hit so we’ve been hamstrung by infuriatingly slow, throttled speeds.) The Airbnb was $100 after all the fees, but includes free passes to the Aquarium, which we planned to see the next day. We would have had to buy tickets for $100 ($50 each) in the morning anyway, so it ended up being a good find by Taylor.

That Pfeiffer beach though. 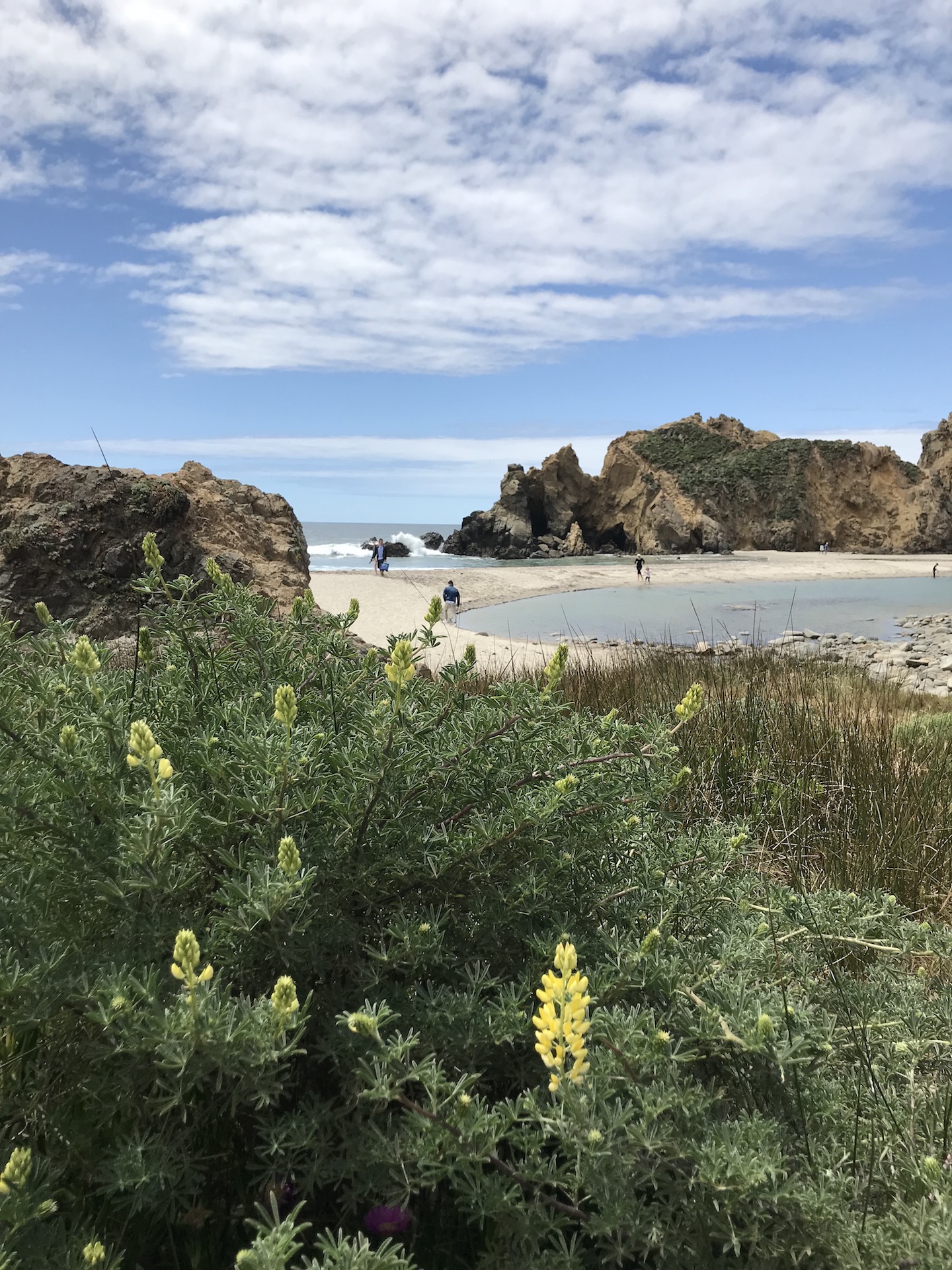 Every place you go has a price of admission (hint: its all worth it, all of it)